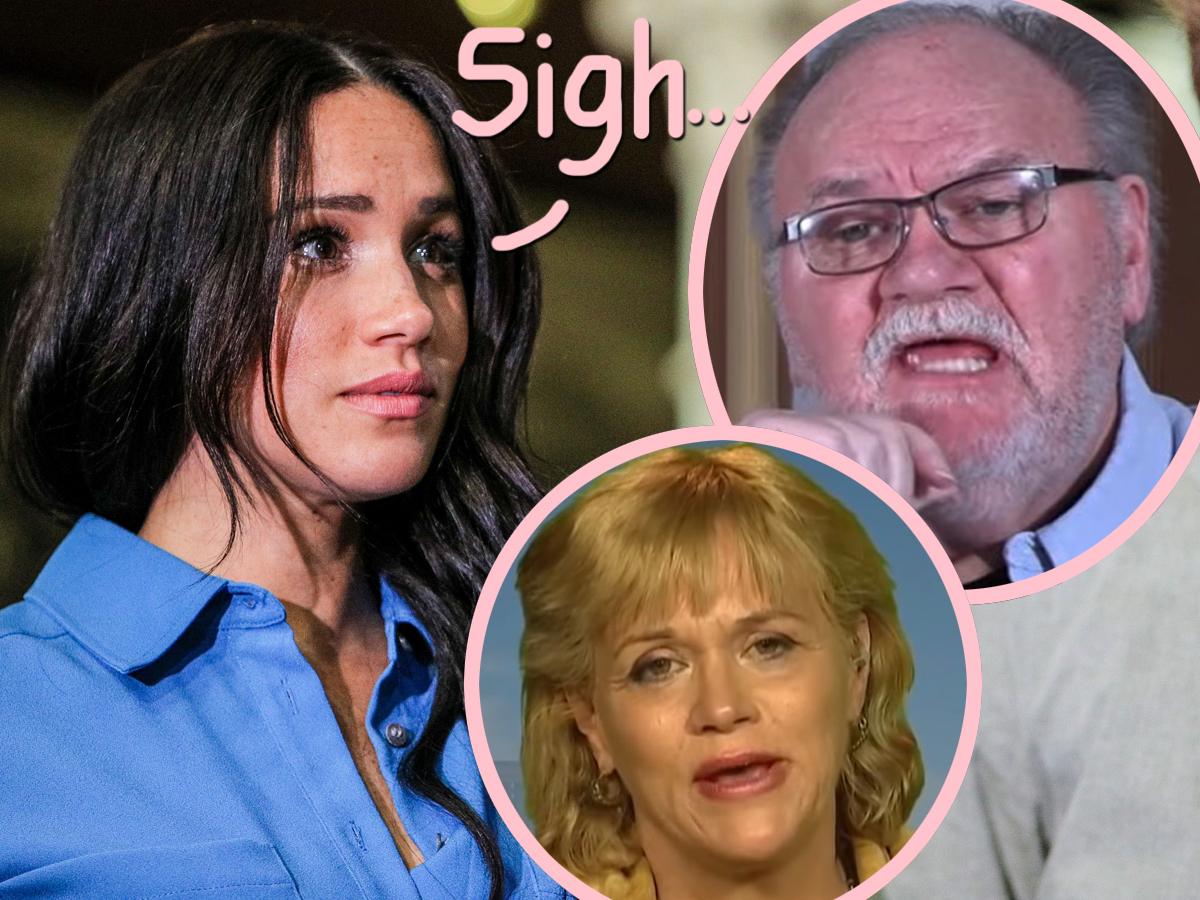 
Watch out, world: Thomas Markle has found a new outlet to harass his daughter.

Meghan Markle’s dad has been a thorn in her side ever since she began seeing Prince Harry. His treatment of her has been pretty heartbreaking, and sadly unrelenting. Since she cut him off, he has appeared frequently on television and given interviews badmouthing her. And now, he has a new format in which to speak ill of his own child: YouTube.

The 77-year-old has a new channel and a podcast-type “show” called Remarkable Friends, co-anchored by celebrity photog Karl Larsen. If you’ve been following along, yes, that’s the photographer that Thomas collaborated with way back when to stage paparazzi photos of himself before the royal wedding. Pretty shameless stuff. (In the first episode, he says Karl “ruined my life, and then saved me.”)

In the course of their new show (which was inspired by Joe Rogan, heaven help us all), the Markle patriarch discussed his daughter Samantha Markle’s lawsuit against the Duchess of Sussex. He remarked:

“I’m standing up for my oldest daughter, Samantha. In this case, she should win because Meghan’s book was full of lies about her. I would appear in a deposition in this case, if it came to it.”

To recap, Samantha is suing her half-sister for $75,000 over various alleged falsehoods. (It’s unclear if those supposed lies would even constitute defamation.) According to TMZ, the author of The Diary of Princess Pushy’s Sister claims with no apparent self awareness that Meghan’s “harsh words have hurt sales of her autobiography.”

Of course, her similarly devoid-of-self-awareness father has her back. On his new YouTube show, he shared:

“I’ve been trying for almost four years to get to see my daughter and her ginger husband in a courtroom face-to-face. I haven’t seen them face-to-face or my grandchildren, so I’d be thrilled to come to court and talk and defend my oldest daughter.”

If you have to sue your child just to get in the same room with them, your relationship is likely beyond repair!!!

The former director of photography stated he’s “certainly pulling” for Samatha to succeed in her suit against Meghan, adding:

“There are so many obvious, obvious lies that are immediately challenged that I can’t imagine Meghan even going into the court with this. She can’t defend the things she said.”

Again, even if they were untrue (and we’re not sure we’d trust Thomas’s word on that), it doesn’t necessarily mean her statements were defamation. Regardless, he was happy to throw the ex-royal couple under the bus, saying:

“It amazes me that they go on Oprah Winfrey for hours and sit there and exposed things that they shouldn’t be exposing to anyone and I think it’s so disrespectful to the royals. I am basically what you’d call on the queen team. And I have great respect for all the royals.”

Mmhmm. All those staged pap shots had “royal respecter” written all over them.

The rest of the episode featured more of Thomas’s greatest hits, like complaining that Harry never asked him for Meghan’s hand in marriage and insisting that no one protected him from the media after the engagement. He’s a bit of a broken record at this point, but if you’re interested in the full episode, you can check it out (below):