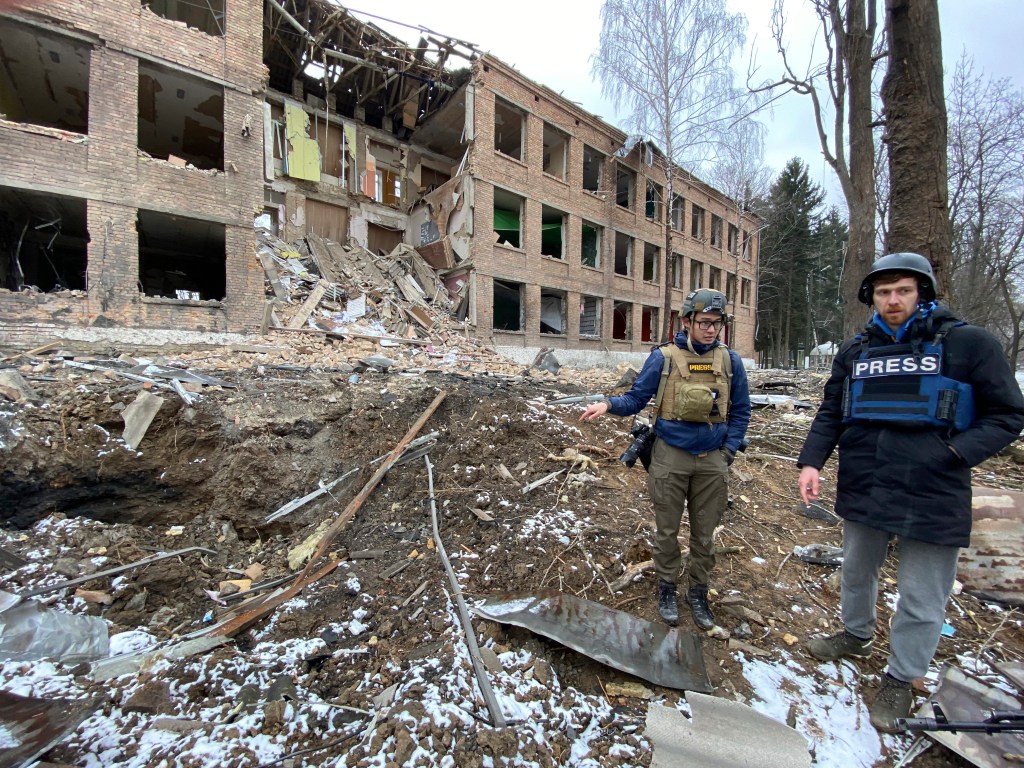 EXCLUSIVE: Leading Ukrainian journalists have spotlighted the challenges of covering what has become a warzone overnight, as they fight to battle Russian propaganda while facing heart-wrenching personal choices.

Speaking exclusively to Deadline, 1+1 Media TV Host Marichka Padalko and Slidstvo.info News Reporter Liubomyra Remazhevska said they are taking each day as it comes, setting their priorities depending on where the news takes them rather than planning ahead.

Padalko, who was the first on air when the invasion started last week, is working on United News, which brings together the news might of the nation’s top four media organizations to broadcast 24/7 news with no commercial breaks.

“In the very beginning we were faced with a very difficult choice – ‘Do I take care of my kids or do I take care of the audience that has been relying on me for years?’,” she said, in a written statement to Deadline.

Padalko’s children were swiftly taken to a hotel in Western Ukraine. She expected to join them within two days but was “in a state of denial” about the invasion and they are now staying long term with her parents.

Padalko’s team has relocated to a back-up studio outside the capital Kyiv due to the “continuous air raid sirens,” allowing them to broadcast during their allocated slot and also take over from colleagues in Central Kyiv when the bombing becomes too bad.

“We are uniting our resources so we don’t get terribly exhausted,” she said.

Padalko and Remazhevska “do not do long-term planning” but make calls on where to broadcast from each morning.

Alongside a colleague, Remazhevska, who was formerly an Investigations Editor but pivoted to News Reporter when the invasion happened as “nobody is interested in corruption at the moment,” car-pools with other journalists in large vehicles as so few are available.

She is spending her nights in bomb shelters but doesn’t consider this her biggest challenge.

“The most difficult part is speaking to people because they all have their own stories to tell and mostly these stories are horrifying,” she added.

“People are crying. They are terrified but they want the world to know the truth. And everywhere we go we meet people who don’t know what is happening because they have no connection. They want to know about negotiations between Russia and Ukraine, and about international society.”

She told heart-warming stories of being given free baked croissants in the city of Bucha and limitless petrol for her car even though gas is in short supply.

Her publication’s aim is to battle Russian propaganda.

Slidstvo.info has already created articles and videos challenging misinformation such as the claim that no Russian has died or been captured in the conflict, and these stories have racked up thousands of views and reads.

“We are trying to establish the truth and use our abilities and knowledge everywhere we can,” Remazhevska told Deadline yesterday via the Signal app. “I know as a reporter I can show the world what is happening and if I can I will.”

She was speaking hours before 1+1 Media CEO Yaroslav Pakholchuk sent an open letter to distributors, content makers and film studios, urging them to “suspend all film and program licenses in the Russian Federation, co-production with Russian companies and sever ties with Russian TV Channels and other businesses.”

Major European and U.S. distributors had been acting on this prior to Pakholchuk’s call while the likes of Banijay and ITV Studios have unveiled “media sanctions” this morning.

His letter listed more than 100 companies and federations that have in some way “refused to co-operate with Russia,” including Apple, Disney, FIFA, Paramount and Sony.

“The Russian aggressor may use films and TV programs in their disinformation, mislead viewers and use it as support and justification for the Russian war,” he said.

“There is no ‘great Russian culture’ anymore. We ask you not to be silent and to vocally support Ukraine whenever possible.”

To further counter propaganda, Victoria Yarmoshchuk, CEO of FILM.UA Group, said her outfit is “distributing our best patriotic content all over the world” and sending any income to the Ukrainian relief effort.

“We are totally focused on resisting Russian propaganda and keeping Ukrainians brave and inspired,” she added. “We are gathering stories and material to make many good films about these events so the world knows about the heroism of the Ukrainian people and aggression like this becomes impossible in the future.”

Both Padalko and Remazhevska also praised the work of the international media.

Padalko said: “I am very impressed by the coverage of international press here – not only do they risk their lives covering the events but they also demonstrate a deep understanding of what is going on in Ukraine and explain it to their audience in a very appropriate manner.”

Tomorrow, dozens of Ukrainian journalists like Padalko and Remazhevska will wake up to a fast-developing situation, not knowing what’s in store for the next 24 hours.