Judd Apatow Admits He Wasn’t Even Watching The Oscars When He Tweeted His Controversial Will Smith Comments! 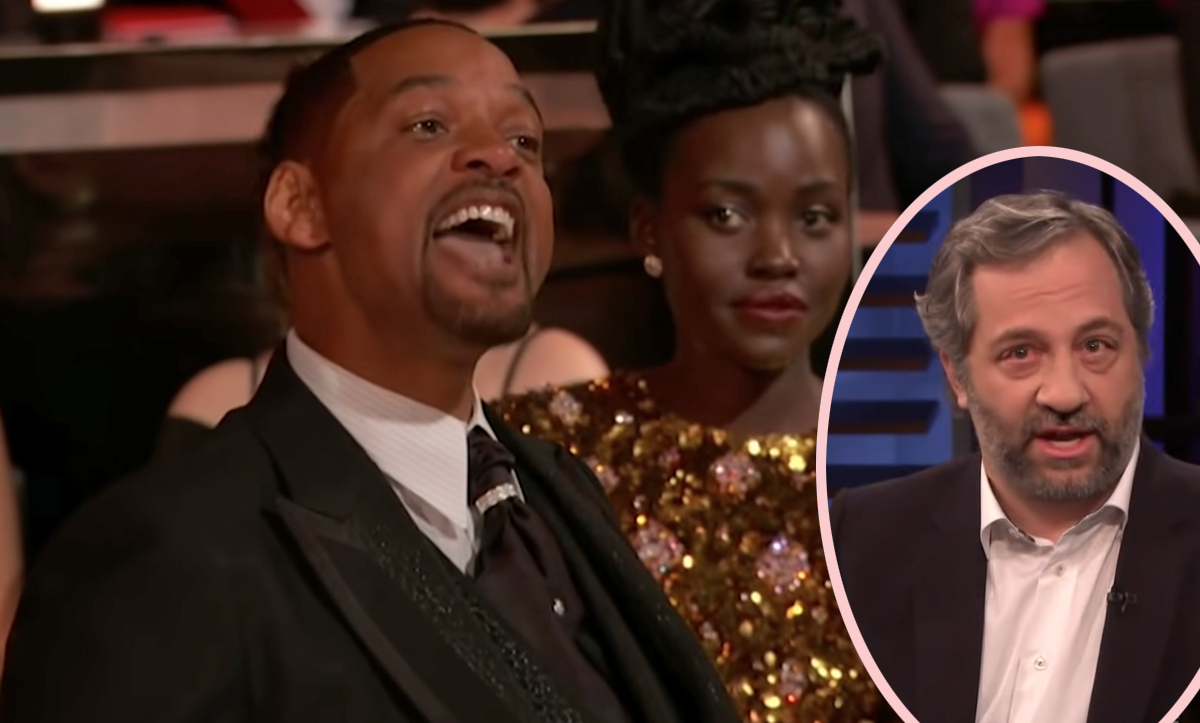 Is Judd Apatow having second thoughts about his very hot take on The Slap??

Among everyone else, the Funny People director weighed in on Will Smith smacking Chris Rock on live TV during the Oscars ceremony Sunday night.

Related: What Peace? Chris And Will Reportedly Have Not Spoken Since Slap!

If you (somehow??) haven’t seen by now, Rock poked fun at Jada Pinkett Smith‘s bald look, comparing her to G.I. Jane. Pretty gross considering it’s not a style choice but a result of her battle with alopecia, something she’s made emotional public statements about being embarrassed and distraught over. But Will shocked the audience by getting out of his seat, walking up to Rock, and slapping him across the face — before yelling:

“Keep my wife’s name out your f**king mouth!”

Judd came out swinging, so to speak, on Rock’s side. He gave one of the strongest characterizations of Will’s behavior, writing:

“[Will] could have killed him. That’s pure out of control rage and violence. They’ve heard a million jokes about them in the last three decades. They are not freshmen in the world of Hollywood and comedy. He lost his mind.”

“I’m glad Chris is ok. Will learned nothing training for Ali. Will Smith’s punches are as soft as his raps.”

Followed by jokes about how there would be violence against more comics, like co-host Amy Schumer:

“Alert– @amyschumer – do not go to the @VanityFair party. Will Smith wants to talk to you about the monologue. Chris– I think you should take him for all his King Richard, I mean, Hitch money. #Oscars”

However, he deleted every tweet by the morning. So did he have second thoughts? Certainly a lot of folks have been chastising his take ever since, with many even suggesting his characterization of Will as “out of control” and consumed by “rage” are the result of an underlying racist bias.

Related: Fans Furious After Oscars Leave Bob Saget Out Of In Memoriam!

See just a few of the many (below)!

“I can’t get over Judd Apatow claiming Will Smith could have killed Chris Rock. For a small slap! It’s the world’s greatest reach but it’s not a reach to say it’s exactly this logic which exaggerates the danger of black people and leads to fatal policing and longer sentences”

“This is a wild thing to say Judd. As a fan, I urge you to really rethink this. It was not uncontrolled violence. The video is widely available so you know this.”

“Judd Apatow clutched his pearls so tight they snapped. The way white people assign murderous “out of control rage and violence” to Black men. It was an openhanded slap. He lost his temper not his mind. It was wrong. It was not homicidal.”

So did Judd delete because of the backlash? Because he realized he was wrong?

Not exactly. He’s hardly apologizing in his first interview since, instead telling Jessica Shaw on SiriusXM’s Pop Culture Spotlight that he’s just entertaining himself — and doesn’t want to be taken so seriously:

“Lately, I just don’t mind taking tweets down. You know what I mean? Like why do they have to live up there forever? Sometimes something happens and you go on a little joke writing surge, like something is so ridiculous like that. And so, you’re home and you’re bored and you write ten jokes that make you laugh. And then you listen to people debate whether or not, “oh, it wasn’t that big a deal,” or “it was a big deal.” And then you go to bed and you’re like, “I don’t care.” I don’t need people debating my stupid impulsive comments for the rest of my life.”

Wow, it really seemed like he had such a strong, visceral reaction! We kind of thought he was defending Chris Rock because they were friendly or something, but he’s really taking zero ownership of his opinions?

He did offer a much less heated take, saying:

“I’m sure it is more complicated in some way, but my basic thought is just, there are people we look up to and people copy them. And so, we don’t want our big night in Hollywood where we’re supposed to be proud of the work we’ve done and our industry become something that looks like people losing their minds on a long flight, you know. It’s not good for anybody involved, what happened. And I hope something comes out of it, which is a lesson. I hope people speak honestly about it. I hope that Will Smith takes the opportunity to explain himself in a way that will remind people that that’s not how we deal with moments when we’re aggrieved.”

Shockingly, Apatow went on to reveal his hot takes didn’t even come with any context. In fact, he wasn’t even watching the Oscars! He admitted:

“The truth is that I wasn’t watching the show at that time. I was on the phone talking to a friend and then while we were on the phone, they’re like, “Oh my God, Will Smith just punched Chris Rock.” And so, I actually haven’t watched it in context of the show. I’ve seen the clips. So, I’m not sure.”

Really? The “lost his mind” tweet was from someone who wasn’t watching? He clearly didn’t understand why the joke was an offensive joke about a woman’s medical condition. The Freaks & Geeks creator said:

“My personal thought was I didn’t quite understand the offense, but I may be misreading it because to me, G.I. Jane was the most gorgeous woman in the world. It was Demi Moore at her strongest, most gorgeous. And the point of that movie was that she shaved her head and she looked fantastic. And so, when you say, “Oh, you’re gonna have to do G.I. Jane 2,” and maybe it’s just how I interpret it, I think he’s saying she’s a badass. You could use a different example and make it a really hurtful joke. And so, I don’t know, but there may be more levels to it that I don’t understand. And I don’t know all the relationships involved.”

OK, but the “he could have killed him” tweet was actually in response to someone telling Judd about the alopecia! So he knows about that aspect of it now at least! So given that, Jessica asked what he — as a longtime professional joke writer — what he thought about Chris making that joke. He mostly deflected back to Will, saying:

“I never think of it in terms of right and wrong with the joke. I just think there certainly is a way of handling dissatisfaction, which should never tell people that the solution is to break that barrier and leap on the stage and commit an act of violence in front of people who are inspired by you.”

Sure, but saying violence isn’t the answer is NOT the same as painting the man with the brush of a man who “lost his mind.” Come on now.

Speaking on why Will Smith should be held to such a high standard of behavior, he added:

“I mean, he’s our Sidney Poitier, you know. We look to him to represent the best of people and I’m sure he’s a normal person with a lot of problems. And maybe that situation is much more complicated than any of us know. And maybe we’ll never really know all the levels of it, but it’s certainly a very sad moment for many reasons. The biggest reason being that it might make someone a little quicker to jump up on the stage at a comedy club somewhere. It feels like it is a bad lesson for a lot of people to witness.”

“Our Sidney Poitier”? While he’s not being asked about the accusations of racism, he did happen to compare Will to another Black film star. Is he saying Will has to be a better role model because he’s Black? We mean, he didn’t just happen to pick Poitier, who has often been cited as the representation of a Black man of class to white audiences. Even this milder take feels like it’s more racially charged than it should be.

While we obviously don’t condone Will hitting the man over the insult, we have to agree that painting him as some kind of rage-fueled attacker who can’t control himself does feel pretty overboard. He didn’t tackle the man, he slapped him and walked away, fixing his suit as he went. It was angry and violent — but pretty in control.

Judd wasn’t alone in his interpretation, however.

On his own SiriusXM show Monday morning, Howard Stern went the same way, describing Will as having mental issues:

Again, seems like a pretty big leap to us to call the man’s mental health into question.

Will has, of course, since apologized for his behavior, writing on his Instagram:

“Violence in all of its forms is poisonous and destructive. My behavior at last night’s Academy Awards was unacceptable and inexcusable… I was out of line and I was wrong. I am embarrassed and my actions were not indicative of the man I want to be. There is no place for violence in a world of love and kindness.”

Doesn’t sound like someone out of his mind to us.

What do YOU think, Perezcious Oscar watchers??

Erica Mena Shares That She Is Officially Divorced! (Video)