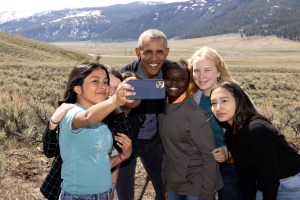 The 44th President of the United States is going to front a five-part docuseries for Netflix next month.

Taking his post-White House career to yet another level, Barack Obama will appear in and narrate the internationally spanning Our Great National Parks.

Set to launch on the streamer on April 13 and spanning five continents, the five-episode Our Great National Parks was first announced on February 5 last year. At the time, as a part of Barack and Michelle Obama’s Higher Ground shingle’s Netflix slate, there was no hint that the former Commander-in-chief would be anything more than an EP on the series.

Yet, it makes sense when you consider the two-term President, best-selling author, and multiple Grammy winner’s history.

Clearly not the first or likely last POTUS or would-be POTUS to host a TV series, the Hawaii-born Obama was admittedly a pretty fierce advocate for public lands and waters while in office. Obama, who recently tested positive for Covid-19, expanded and set up more than 550 million acres of soil and sea from 2009 to 2017. That’s more than any other occupant of the Oval Office so far.

Check out the Our Great National Parks trailer below: